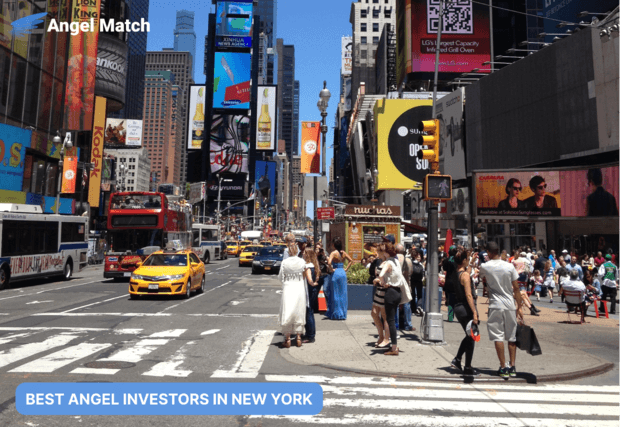 New York is one of the most populous states in the United States. In fact, New York City (all 5 boroughs) has 8.38 million people. Compared to other cities like Los Angeles and Chicago, New York City has almost four times the amount of people. Because of the number of people, New York's market continues to grow and exceed expectations.


Some of these angel investors are part of groups, while others invest by themselves. Read on to learn more below.


New York Angels also aren't afraid to invest large sums of capital. In total, the firm has invested more than 130 million dollars across over 300 companies. The group consists of more than 140 investors and the group has over 50 successful exits. Overall, the New York Angels are one of the most successful groups in the United States – not just in New York.

The Soundboard Angel Fund is a well-rounded group that operates in New York and the Tri-State area. This angel group consists of more than 30 members who are entrepreneurs and angel investors. Primarily, the goal of the SoundBoard Angel Fund is to invest in education. This is accomplished by offering incubator and accelerator programs as well as investing in education technology.


The SoundBoard Angel Fund is special for a handful of reasons. First and foremost, the angel group is small and tight-knit while less money is invested, the group works together well and chooses wise investments. Another unique benefit is that the SoundBoard Angel Fund loves to mentor new startup founders. These mentorship programs prevent people from making mistakes with their startup companies.

The ARC Angel Fund (New York) invests in early-stage startups. However, the group only focuses on startups with rapid growth potential. Unfortunately, this makes ARC's investment portfolio more exclusive when compared to other angel investors in New York. That aside, ARC is one of the best options in New York if you need an angel investor.


ARC is one of the best options for a few reasons. First, the group invests between $50,000 and $250,000. So, you don't have to worry about getting low-balled for less than $50,000. Furthermore, the group has an intense vetting process to remove bad members and ensure funding goes where it's necessary. The process entails evaluating the source, ensuring the company is worth less than $5 million, and due diligence.


ARC invests in a few different industries in New York. The most common industries include the technology and fintech sectors. Depending on the startup, ARC also provides mentorship and education programs. It's also possible for ARC to help with shared working spaces.

The Hudson River Angels (HRA) are an early-stage startup angel investor group. So, the group invests in startups during the seed round or pre-seed round of funding. However, there are situations where HRA members invest in startups during the Series A round of funding. This New York-based angel group invests in technology companies and some fintech companies.


The HRA also invests a generous amount of money in early-stage startups. The HRA can invest between $5,000 and $500,000 in startups. The most common investment amount is over $50,000 and funding usually occurs during the seed round of funding.

As the founder of Brooklyn Bridge Ventures, Chris O'Donnell is one of the most notorious angel investors in New York. He's the manager of a venture capital firm that's worth more than $23 million and his wealth stretches across two separate funds.


While Chris O'Donnell manages a venture capital firm he's also an angel investor. He prefers to invest in tech companies and he's been the co-investor on $750,000 deals. Furthermore, Chris O'Donnell is known to invest between $50,000 and $350,000 of his money.


It's also worth noting that Chris O'Donnell has a unique investing strategy. He won't invest in companies that have raised more than $750,000. His primary focus is on early-stage startups. Therefore, he typically provides funding for pre-seed and seed rounds.

David Tisch is the co-founder of Spring and a managing partner at a venture capital firm. The firm that Tisch is affiliated with is Box Group. Box Group is a New York early-stage angel capital business. This means that Tisch's firm helps early-stage startups during the pre-seed and seed rounds of funding. Box Group has invested in dozens of companies including Vine, BarkBox, Warby Parker, and more.


Another unique fact about David Tisch is that he co-founded TechStars and served on mayor Bloomberg's advisory council. For this reason, Tisch has a lot of influence and credibility in New York. So, you don't have to worry about where the money is coming from and if the venture is safe.


While David Tisch is well-known for his venture capital firm or service on the mayor's advisory council, he's also an angel investor. Tisch likes to invest in seed round and pre-seed round startups within the tech and fintech industries.

37 angels is one of the most unique angel investor groups in New York. What makes this group unique is that it consists of mostly females. The main purpose of the angel group is to bridge the pay gap and help women achieve success through entrepreneurship and investing.


Because this angel group is dedicated to helping women, it's not just a financial group. 37 Angels also offers investor boot camps for training and plenty of resources to help women learn about startups and business in general. While 37 Angels is one of the smaller angel groups, the group invests in between 10 and 12 companies per year. The investment amounts vary between $50,000 and $200,000.


37 Angels also function uniquely. The organization prefers to invest in women and most of the investors are women. To determine how money is invested, the group meets every two months to hear eight pitches. Companies from all over New York are invited to this pitching forum.


The Eastern New York Angels first came into existence during the early 2000s. Its first iteration was the Tech Valley Angel Network (TVAN), which consisted of a group of high-net-worth angel investors. Today, the group is known for investing in several types of New York startups. Some examples include Free Form Fibers, Vital Vio, and EnergRotors.


Still, what sets the Eastern New York Angels apart from other angel investors in New York is the education component of the group. While the group loves to provide funding for startups, there are also resources for angel investors and entrepreneurs to learn more. The group is known for investing between $50,000 and $250,000 in early-stage or pre-seed startups.

Connecting with investors has never been easier. Today, it's easy to join angel networks and cold-pitch angel investors online. That said, knowing where to get started is challenging – especially if you don't have a network. Fortunately, AngelMatch is here to help.


AngelMatch is an investor database filled with more than 90,000 angel investors and venture capitalists. Joining AngelMatch's investment network gives you access to plenty of additional resources and tips for connecting with investors.


Give AngelMatch a try today and see how many angel investors in New York you can connect with.