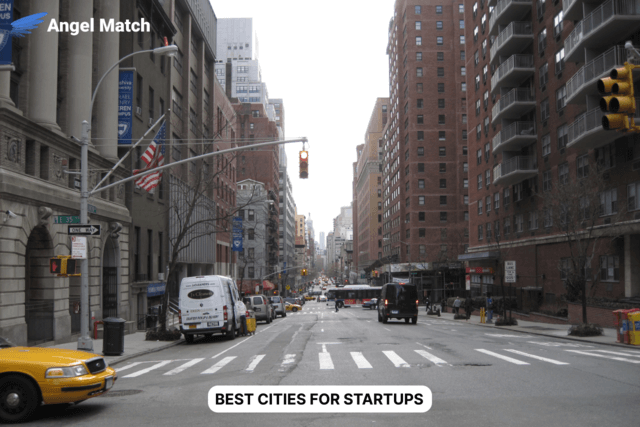 What are the Best States for Startup Jobs?

While there are several great states for startups, it's important to choose states that have established companies and investors. We've based our list of the best places by factoring in angel investors, venture capitalists, angel networks, and more.


We list the best cities in the United States to create a startup or find startup jobs below.


New York City is also a great place to look for startup jobs because it's a wealthy city. The city makes upwards of $1.9 trillion every year and maintains a low unemployment rate of 4.4%. For startups, many large firms have come from New York like Venmo, Birchbox, and Zocdoc. In New York, startups pay between $60,000 and $120,000 depending on the industry.

Austin is another great city to look for startup work. It's one of the fastest-growing cities in Texas and more people continue to move to Austin each year. Today, the city has a population that's close to 2.5 million. Furthermore, Austin has more than 3,000 startup jobs available according to data from the networking platform LinkedIn. Some notable Austin startup companies include TicketCity, Dell, and even Kendra Scott Jewelry.


Austin also has one of the fastest-growing economies in the United States. It's growing by more than 20% year-over-year. Plus, many people from California are moving to Texas and California cities like Los Angeles are well-known for establishing startups. In Austin, startups pay between $40,000 and $100,000 on average. However, some senior-level positions will pay between $100,000 and $200,000.

Another fast-growing city, Boston is great for startups. Boston has a population that's just under one million with almost 700,000 people. However, the metropolitan area has close to 5 million residents. According to LinkedIn and several angel networks, there are more than 3,000 available startup jobs in Boston. Plus, the fast-growing economy makes it the perfect place to create a startup.


Boston startup companies also pay well compared to midwestern and southern startup firms. For example, many Boston startups pay between $85,000 and $120,000. Some senior-level positions will even pay between $150,000 and $200,000. Notable startups to originate in Boston include Formlabs, Algorand, and Transmit Security.

Seattle is another city with a huge market. The city's annual GDP is over 300 billion dollars and sources like Forbes estimate that Seattle's market has a future job growth rating of 44%. Other key economic indicators for Seattle include a low unemployment rate, a high population density in the metropolitan regions, and more. In fact, Seattle is known as the fourth-richest city in the United States.


When it comes to working for a startup or creating a startup, Seattle is a great market. Startups in Seattle pay between $50,000 and $100,000 on average and the city is close to Silicon Valley, Chicago, Oregon, and Los Angeles. The city's proximity to popular startup areas makes Seattle a great place to connect with investors. Some examples of Seattle startup companies include Aloft, Bamboo Learning, and AccelByte.

Chicago continues to be one of the best places to create or work for a startup. In Chicago, the growth rate for new startups is upwards of 40%. This means that each year 40% more startups are established in Chicago. These startups are typically in the technology and food service industries. It's also easy to connect with investors in Chicago because it's one of the most populous cities in the United States. In fact, it's the third-most populous state in the United States.


While Chicago is known for its big population and rapidly-growing startup market, it's also great for finding work. The unemployment rate is below 5% and there are more than 3,000 job listings for startup companies. On average, startup companies pay between $45,000 and $75,000 in Chicago. Some examples of tech startups in Chicago include M1 Finance, Vouch, Project44, and ShipBob.

Philadelphia is a massive city located near the East Coast. It's near other cities like Pittsburgh in Pennsylvania and even close to New York City. Philadelphia's location makes it a good place to settle down if you're looking for work or interested in starting a business. Still, there are a few factors that make Philadelphia great for startups.


First and foremost, the city is huge – almost 150 square miles. The city also has a large population of several million and it's the sixth largest city in the United States. Startup jobs in Philadelphia are also common. The city has a low unemployment rate, low income and sales tax rates, and high average salaries. Most startup jobs in Philadelphia will pay between $35,000 and $150,000. There are also several famous startup companies in Philadelphia. These include Gopuff, Tozuda, Proscia, and Simply Good Jars.

San Francisco isn't one of the largest cities on our list but it does have a lot of startup potential. Startup jobs in San Francisco pay between $50,000 and $200,000 and the city is close to other big cities like Los Angeles. While the population (almost one million) isn't as big as some other cities, there are still more than 3,000 startup job openings in San Francisco.


For creating a startup, San Francisco is also a good place to settle down. With a GDP of more than $200 billion, there's plenty of money to go around in San Francisco. As a West Coast city, it's also close to major shipping ports. The city's proximity to shipping ports makes it easy to get products from China, India, and Europe. Within San Francisco there are also noteworthy startup companies. Examples include Bolt, Stripe, and DoorDash.

Atlanta is becoming known as the startup capital of the South. It's the capital of Georgia, which borders Florida (another booming startup state). In Atlanta, several hundred startups are created each year within the technology, food services, and biotech industries. Within these industries, startup jobs in Atlanta pay between $35,000 and $82,500 on average.


While Atlanta is one of the smaller cities on this list, it has one of the largest economies. In the United States, for example, it's the 10th largest city when it comes to economic size. Moreover, Atlanta is the 18th largest city in the entire world. Atlanta is also becoming a wealthy city. According to data from recent years, the city's GDP is over $300 billion. When it comes to well-known startups Atlanta has a few. Some well-known startups in Atlanta include Simply Business, Popmenu, and Carbice Corporation.


How Do You Find Startup Jobs?

There are several ways to find startup jobs. Primarily, it's best to send your resume out over websites and platforms like Indeed. Indeed and similar platforms help you connect with startups and other available job opportunities. It's also a good idea to update your LinkedIn profile and build connections there.


While these are the basic ways to find startup jobs, that's how everyone else does it. To set yourself apart, it's not a bad idea to connect with investors and startup founders directly. AngelMatch provides an investor database that will help you connect with angel investors, venture capitalists, and even some startup founders.


AngelMatch also has filter options that help you find investors and founders in your state.