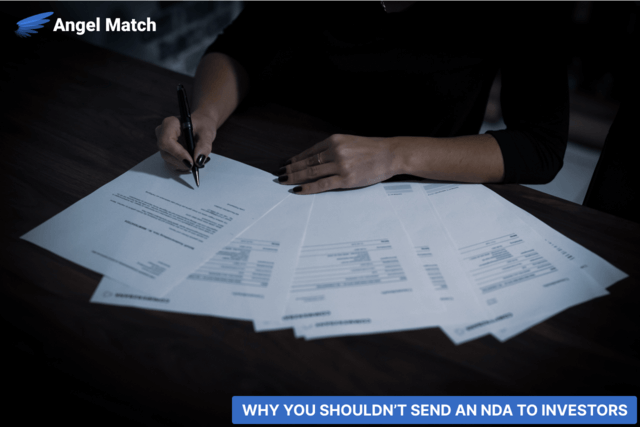 As a founder, your startup involves the development of an idea. Your idea is completely unique in your industry. Naturally, it can be scary to begin to share the idea with dozens, if not hundreds, of investors. The fear that someone can steal your idea is real and concerning. Sending an NDA comes from a good place with a desire to protect your concept until you can transform it into a functioning business.

While an NDA may provide security and peace of mind, it’s not always the best idea to start interactions with potential investors by requesting them to sign an NDA. Many factors could turn your interactions with investors sour and lead to not landing the funding crucial to the development of your startup. Read on to learn more about NDAs and why you shouldn’t send them to investors.

An NDA or a Non-Disclosure Agreement is a legally confidential contract that helps establish a secure relationship between two parties, the founder and the investor. When someone signs an NDA agreement, they agree to keep the information given to them to themselves without releasing or sharing it with anyone outside the parties involved.

The NDA agreement offers protection and if broken, the parties are susceptible to the consequences agreed upon in the contract. It depends on the conditions, including fines, liability, termination, or more. Violators can be subject to a lawsuit for breach of contract, copyright infringement, or breach of fiduciary duty.

Non-disclosure agreements are a low-cost way to create protection for a founder’s concept or idea before it comes to fruition. It creates a legally binding contract that would prevent investors from sharing the idea with other investors, founders or professionals in the industry.

Why You Shouldn’t Send an NDA to Investors

An NDA can be a vital asset to any new startup. It can help you share the idea about your product or service without worrying about them sharing the information with others or putting effort into adding it to their own portfolios. However, sending an NDA to investors may not have the intended effect you may want. Most investors working with founders rarely, if ever, share or steal startup ideas or concepts. Here are some reasons why you shouldn’t send an NDA to investors.

There Are Likely Similar Startups

– Investors will often meet with hundreds of startups within a short period. While every founder would like to believe their idea is unique, investors are often pitched very similar ideas. If they signed an NDA for every founder, it could create a lot of legal implications and problems for investors. For example, if they were to sign an NDA for an electric bottle opener and invest in another founder’s bottle opening company, you may be able to sue them. Signing an NDA for every founder would lead to many legal fees. It would be time-consuming to not only read, review, and keep track to ensure they remain in compliance.

– Investors are in the business of finding founders with a great idea they can invest in and make a return. Often they want to invest in several startups to maximize their potential earnings. Investors streamline their interview process with founders to ensure they can meet with as many startups as possible. An NDA can slow down the process of finding a startup for investors and could potentially minimize the number of startups they can actually invest in. They do not want to change their process or workflow because one founder demands or requests an NDA. They will simply move on to the next.

NDAs Can Make You Seem Inexperienced

– Throughout the startup community, NDAs are not a standard practice as it is. If you decide you don’t want to pitch to investors without an NDA, it can signal that you may be very inexperienced. They may not move forward with a meeting with you. Investors see hundreds of founders every year, and it’s easy to just move on to the next meeting without hesitation.

Can Set a Bad Precedent for Trust

– Trust is essential in a founder/investor relationship. If investors were known for stealing ideas or concepts, they would not be around long in the investment industry. Their reputation would be forever damaged. When you ask an investor to sign an NDA, you are essentially telling them you don’t trust them. Especially when they have a track record of successful deals, businesses, and a foundation for strong relationships. It can make your startup seem very unappealing to partner with.

– Most investors are former entrepreneurs and have been through the process of building a startup or company. They get into the investment business because they don’t want to go through that process again. They want to make their money work for them by investing in young startups with the potential to minimize the amount of hard labor they have to put in. Most angel investors or VCs have a lot of startups they have already invested in, and they don’t have the time to start another company. For this reason alone, investors are not going to steal your idea. They would much rather let a team build the product or service.

You Will Have to Gather Evidence

– If you secure an NDA with investors and you end up having to sue them, the NDA may not even hold up in court. You have to provide a lot of solid, concrete evidence that the investor took action against your NDA, which can be incredibly difficult. If the information is already publicly available, it will be challenging to prove.

It Can Be Costly to Hold Up

- Beyond spending time and resources documenting and collecting proof that the investor breached the NDA, it costs a lot of money to pursue the lawsuit. The entire court process can be lengthy, and you will need a lot of funds to survive the entire process against an investor who likely has millions to continue fighting.

It Can Damage Your Reputation

– If you consistently request an NDA, it may not look good to other investors and damage your reputation, and potentially impact your ability to secure funding in later rounds for your startup. Not to mention if you do end up suing, you will lose a lot of respect among the startup community and lose valuable resources and influence. It could be the downfall of your company.

When Should an NDA Be Used?

It’s very unlikely you will ever need to use an NDA agreement with potential investors. There are very few situations where you would need an NDA unless it’s highly technical, proprietary information that could easily be copied. This is if your startup is working with an advanced technology sector and are riding on a scientific breakthrough that can revolutionize the industry, then an NDA would be essential.

How to Raise Funds Without an NDA

–Going into any investor meeting can potentially be risky but starting off with an NDA can send the wrong message. You can protect your idea without an NDA by implementing a few best practices to ensure you are not giving away all your trade secrets.

Share Only Information You Are Comfortable Going Public With

– You can protect your idea by creating a presentation that compels investors to invest in your startup without giving away all of the information or behind-the-scenes that may be sensitive. Include only information you can afford to make public. The finer details behind your startup can wait until funding is secured, and most investors understand.

Research Investors Before You Meet

– One of the best ways to ensure you don’t end up in front of an investor without good intentions is to thoroughly research every investor. Review their portfolio and backgrounds and check to see if they have any investments in similar ideas that could be considered competition.

– For any pitch decks you share with investors, be sure to watermark every slide. The watermark protects your startup by creating a sort of signature that is nearly impossible to edit out. It can be valuable to ensure the information cannot be shared or used in any way other than intended.

While it is incredibly rare to be stolen from, it’s always important to protect yourself without damaging your reputation. When you get in front of investors, it’s all about the presentation and ability to share your idea without giving away the farm. An NDA is rarely necessary for investors. You can do your due diligence to ensure you get in front of trustworthy investors to make your pitch and secure funding safely.

When you're ready to start on your journey to find the perfect investor, it can be overwhelming. Get the help you deserve to get your startup off the ground. Angel Match can match you with over 90,000 angel investors and venture capitalists in one place. Learn more about how Angel Match works here.