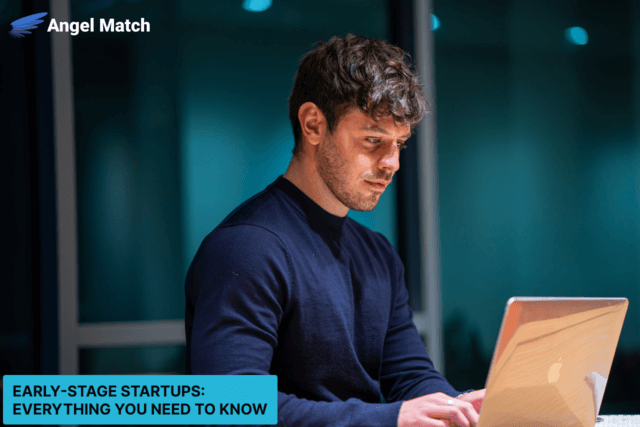 Startups go through a life cycle that's broken down into several stages. Stages may vary depending on the type of company and who you ask but the principles always remain the same. Startups begin in an early development stage, move to a growth stage, and finish in a late stage or with an exit. Knowing about each startup stage and where your company lands will help you adjust your strategy.

Also, startups don't always progress in a linear fashion. There's no need to rush from the early stages to the later stages. In fact, it's in your best interest to move at an appropriate pace for your company. At the start, you're competing with yourself the most.

What is an Early-Stage Startup?

What are the Challenges that Early-Stage Startups Face?

Startups in the early stages face numerous challenges. Early-stage startups typically don't have a lot of capital or sales, which makes revenue limited. It's for this reason that angel investors target early-stage startups; there's a big opportunity for rapid growth in the later stages. Other challenges include giving up shares of the company for capital, developing products with limited resources, and high staff turnover.

What do Early-Stage Startups Need to Be Successful?

Early-stage startups need a lot to go right in order for success to happen. Unfortunately, almost half of all startups fail within the first year because the need for the product or service is overestimated. So, it's important to reflect on the startup and ask yourself a couple of important questions.

These are only some of the questions you need to reflect on. Creating a startup is not easy and 95% of new small businesses close within the first five years. When creating a startup, make sure it's a calculated risk.

What are the Other Startup Stages?

Early-stage startups are new and exciting but that doesn't mean they're the only stage. As startups continue to develop they enter new phases. We list a few of these phases below.

Depending on the company, there may be more or less stages. For example, some startups replace an exit phase with a renewed phase. Stages also aren't linear, so startups may move back stages depending on market conditions.

What is a Growth-Stage Startup?

A growth-stage startup is a company that's ready to start expanding. Once a product is developed and ready to sell, startups will begin marketing and raising capital. Capital during the growth stage mostly comes from angel investors or venture capitalists. The type of revenue that comes in depends on the funding round. While angel investors shy away from the Series A or Series B rounds of funding, that's the most common time for venture capitalists to get involved.

Growth-stage startups will also hire more staff, come up with new products, and start to pay back debts to investors. Depending on how well the startup does, it may remain in the growth stage for several years. Ultimately, the growth-stage is all about helping startups grow.

What is a Late-Stage Startup?

Late-stage startups are companies that begin to mature. In the late stages, startups will often have CEOs that run the company and a reliable source of revenue. New products may also be in development for customer satisfaction. Many late-stage startups don't need to raise capital but venture capitalists and growth firms will invest in them.

The exit phase is not something that every startup goes through. Startups enter the exit phase when the founder or majority owners decide to exit the company. For investors, this means removing money from the startup or taking profits. Founders will also make exits and sometimes sell the company. In fact, many founders create startups to sell them.

What Funding Types are Available for Early-Stage Startups?

Several types of funding are available for early-stage startups. We list the most common funding options below.

Depending on the startup, founders may choose to raise money through one or more of these avenues. According to investor data from 2022, the most popular funding method for early-stage startups is crowdfunding.

What Rounds of Funding Occur During the Early Stages of a Startup?

What's the Best Type of Funding for Early-Stage Startups?

What are Some Examples of Early-Stage Startups?

Below we list some examples of early-stage startup companies.

These are only some of the examples of early-stage startup companies.

The biggest problem that early-stage startups face is capital. Without capital, it's hard for early-stage startups to reach growth stages or late stages. Therefore, it's important to connect with investors or raise money through crowdfunding to get your startup off the ground.

Fortunately, AngelMatch has an investor database with more than 90,000 angel investors. AngelMatch also makes it easy to develop pitch decks and allows data to be exported to Google Sheets or Excel. Overall, AngelMatch has the best venture capital database around.